This bicycle was used by the Canadian Cycling Corps in WW1.

Did you know that bicycles played a crucial role in the World Wars? Unlike other ‘mounted troops’ the bikes wouldn’t run off and couldn’t be killed by gunfire like horses could. The bicycle was the most trusty steed, indeed.

As there aren’t any of those brave WW1 veterans left, it is important that we continue to share their stories and remember the great sacrifices they made so that we could enjoy the freedom we have today.

One of the most impressive artifacts I’ve heard of or seen from the Great War is this original WW1 Planet bicycle, above.

The Canadian troops were a formidable force, most notably in the Hundred Days Campaign – and offensive that ended the Great War. The bicycle battalions were a crucial part of that battle, and Canada was front and centre. Much of the training for the bicycle battalion was done in Toronto.

This Planet bicycle, used in WW1 by Canadian troops, is estimated to be 105 or 106 years old and is owned by collector Dennis Thomasson who lives near Ottawa and has been collecting for over four decades. Thomasson worked in the bicycle business and was collecting antique bicycles, but after he acquired this bicycle, over 30 years ago, he became focused on collecting Canadian Cyclist Corps materials and now has “more items than he would care to count.”

There is another WW1 Planet bicycle owned by Brad Christensen from Saskatoon.  Thomasson’s bike also originated from Saskatchewan. The Canadian War Museum has a WW2 folding paratrooper BSA bicycle, and the Science and Technology Museum has a WW1 replica, but we are not aware of any other bicycles used by Canadian troops from WW1 (…yet.*)

Canadian Cyclist Corps history was kept alive for years by the late Captain Dick Ellis. Cpt. Ellis produced a periodical called The Cyclone for and about the cyclist corps, which is available at the Toronto Reference Library. Cpt. Ellis also held reunions for corps members up until 1987. In 1993, the two remaining members, Cpt. Ellis and Billy Richardson met to drink a bottle of 1937 champagne Ellis had saved for just that occasion. You can read more about that touching moment in this condensed epub with excerpts from Riding into Battle by Ted Glenn. Cpt. Ellis was the sole surviving Canadian Cyclist. He died in 1996 at the age of 100. 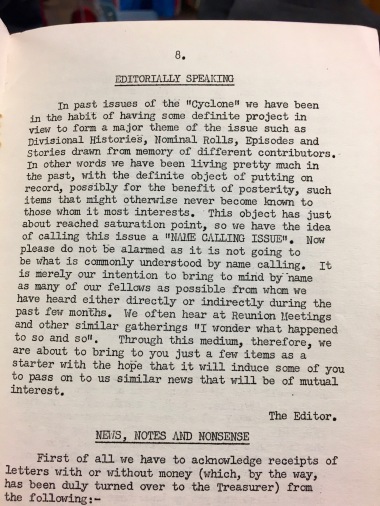 The Cyclone was an important source of reference for author Ted Glenn, who wrote Riding into Battle to help shine a light on the crucial role the Canadian cyclists played in the Great War. Glenn was at the West Toronto Junction Historical Society in early November to talk about the cyclist corps. He credits Cpt. Ellis with almost singlehandedly keeping the cyclist corps memory alive. (Thank you to Don Brown who brought a copy of The Cyclone that belonged to his late uncle.)

Glenn shared some of the shenanigans that the cycling unit would get up to, including a big pile up after the men spotted some bathing beauties in Bristol – apparently it was the first time any of the men had seen women in the new one-piece bathing suits. Good thing those bicycles were fitted with repair kits. Soldier were taught basic maintenance and learned as they went. Other lessons learned during training in Toronto included not tobogganing with your bayonet, as well as the thrill of riding on winter ice. Besides the CNE grounds and Paradise Grove in Niagara-on-the-Lake, a good portion of the training in Toronto took place in the Humber and High Park. The author rides his bicycle down the Humber as part of his commute.

Recruiters for the five original cyclist companies advertised for “men with a fair education … as some knowledge of map reading is desirable. Young fellows who have had experience in surveying, engineering or such office work as is performed by bank clerks have proved useful men in the Cyclist Corps.”  Another ad in the Globe from December 1916 stated: “Cyclists in Demand to Chase the Huns.” There’s a nice little summary, including averts and some other fabulous images from Glenn’s book, here.

A large part of training was done at the Toronto Exhibition Grounds. You can see the military building in parts of this excellent silent film that shows the cyclists training, which is now home to Medieval Times.

The Canadian Cycling Corps played a very important role in WW1 and had the highest casualty rate compared to other units. There were five divisional battalions in total and they were an especially effective force during the Hundred Days Campaign at the end in the Great War (August-October 1918). They were sometimes called the “Gas Pipe Chargers.”

Canadian manufacturers also played their part. Planet and CCM manufactured bicycles for the war in Canada. In WW2 bicycles were deemed so important that the government took over the CCM plant. The WW1 Planet bike is a very rare find, as many Canadian troops rode BSA bikes like their British counterparts, as well as CCM models.

Like their British counterparts, many Canadian cyclists rode Birmingham Small Arms Company (BSA) Mark IV bicycles in the Great War. Standard issue were clips for mounting a .303 Hotchkiss Portable Machine Gun over the handlebar (for short distances when going into action) and another for carrying the gun through the frame for long distances. It is estimated that each cyclist carried about 90 pounds.

Every country involved in WW1 used bicycles at some point. Bicycles were used in wars up to the Vietnam war.

Proving that the bicycle was—and still is today—one of the most efficient machines ever invented.

The triumphs during the Hundred Days Campaign, also known as “Canada’s Hundred Days” for the formidable role that Canada (and it’s cyclist battalion) played, were impressive – but came at a high price. More than 6,800 Canadians were killed and approximately 39,000 wounded during that last three months of fighting. By the end of the First World War, Canada would see more than 650,000 men and women serve in uniform. The sacrifices and achievements of those who gave so much in the effort to restore peace and freedom are not forgotten.

*TheBicycleMuseum.ca is planning an exhibit for November 2020 at the Toronto Reference Library. Do you have an artifact or a story to contribute? Please email thebicyclemuseumptbo@gmail.com

Check out the portfolio page for all our bicycle museum stories and images.